The following features will be available in the near future and included in the release 1.0.0:

The following features will be available in the next releases newer than 1.0.0:

Zeroshell is a Live CD distribution, meaning that it is not necessary to install it on the hard disk since it can operate directly from the CDROM on which it is distributed. Obviously, the database, containing all the data and settings, can be stored on ATA, SATA, SCSI and USB disks. Any security Bug Fixes can be downloaded from the automatic update system via Internet and installed in the database. These patches will be automatically removed from the database by subsequent releases of the Zeroshell Live CD already containing the updates.

The name Zeroshell underlines the fact that although it is a Linux system (traditionally administrable from a shell), all the administration operations can be carried out via Web interface: indeed, after having assigned an IP address via a VGA or serial terminal, simply connect to the assigned address by means of a browser to configure everything. Zeroshell was successfully tested to work with Firefox 1.0.6+, Internet Explorer 6+, Netscape 7.2+ e Mozilla 1.7.3+ 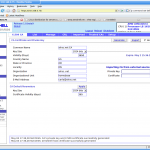 How to stop a linux process

Record your terminal and generate gif with terminalizer