libguestfs is a C library tool for creating, accessing and modifying virtual machine disk images. You can look inside the disk images, modify the files they contain, create them from scratch, resize them, and much more.

The easy way to modify files in a VM’s disk image without powering on the VM, you could “mount” the disk image. You then would be able to modify the content of the disk image before unmounting it. libguestfs works with any disk image, including ones created in VMware, KVM, qemu, VirtualBox, Xen, and many other hypervisors, and ones which you have created from scratch. 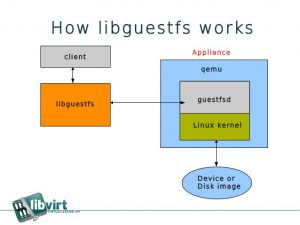 There are many tools which use libguestfs:

guestmount – Mount filesystems from any guest or disk image on the host.

virt-cat – Display a file from a guest.

virt-copy-in – Copy files and directories into a guest.

virt-copy-out – Copies files and directories out of a virtual machine disk image or named libvirt domain.

virt-edit – Edit a file in a guest.

virt-tar-in – Copy files from a tarball into a guest.

virt-tar-out – Copy files out of a guest into a tarball.

BoxGrinder & Oz Projects that can create guests from scratch.

virt-manager Uses libguestfs to display icons and applications in guests.

How to install libguestfs toolset on Linux

The “-m <device>” option is used to specify a partition within the disk image.

By default, the disk image is mounted in “read-write” mode. So you can modify any file in /mnt after mounting it.